END_OF_DOCUMENT_TOKEN_TO_BE_REPLACED

We were set to go to General Santos October 2, 3, 4 and 5 for the purpose of meeting Jaycee’s Kuya and his family. Together with us is his parents so it’s gonna be a mini reunion for them. 🙂

Since its an opportunity to travel, I want to make sure that we at least visit one of Mindanao’s tourist attraction. I want to go to Mindanao’s Boracay which is Gumasa white sand beach, I also want to experience water tubing in Maitum River, and of course to ride the highest zipline in Southeast Asia at Lake Sebu. But since our time is limited, our time only permitted one. Sadly. Huhuhu. So I chose the latter.

Here’s how you can spend time in Lake Sebu for less than 24 hours. 🙂 END_OF_DOCUMENT_TOKEN_TO_BE_REPLACED

(this was supposed to be a 2 day trip but unfortunately our plane left without us [late kasi kami hahah], so we decided to take a bus instead, sayang)

HOW TO GET THERE?

1. Mayon Backpackers Hostel (this one is the famous Hostel in Legazpi, dito sana kami mgpabook but unfortunately, fully booked na sila nung nginquire ako 1 month before our stay) so the alternative is

ATV in Cagsawa is a must! Do this in the morning around 7AM para di pa masyado mainit and para kitang kita mo pa si MAYON! Mas ok kung yung longer trail (BLACK LAVA Trail) ang kukunin mo because this is soooooo fun to do, sobrang mabibitin ka pag short trail lang. We booked ours sa Love ATV Tours, 1150 petot then 400 cc na gamit mo. First timer? No problem, sobrang dali nya lang gamitin. At first medyo nakakakaba but when you get used to it after the practice trail, easy peezy na lang yan sayo! 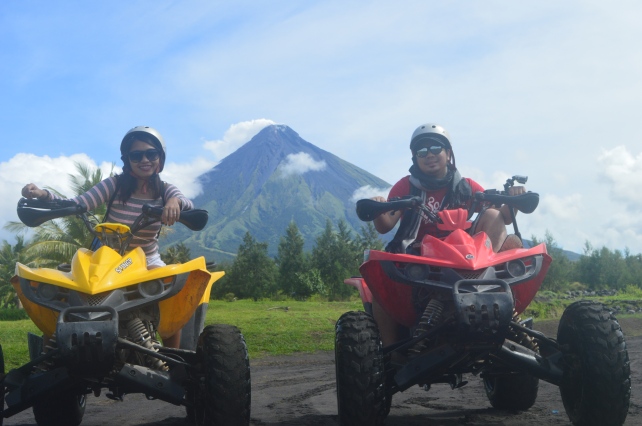 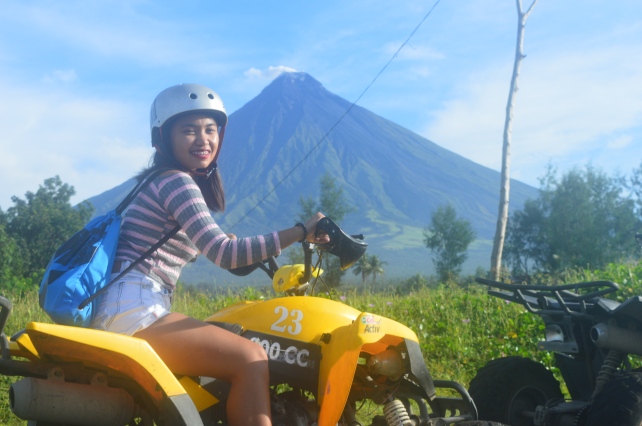 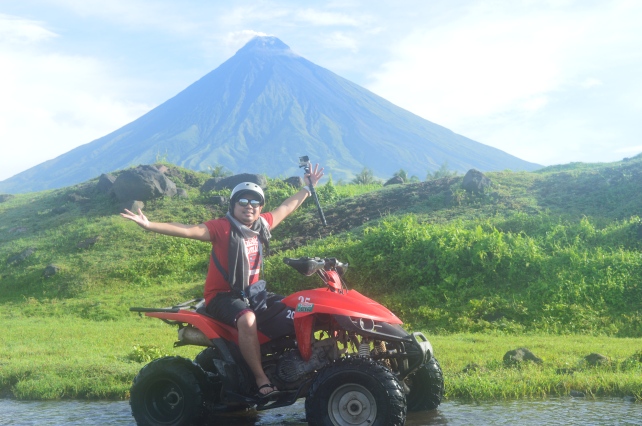 END_OF_DOCUMENT_TOKEN_TO_BE_REPLACED

February 7, 2011. Export Bank Plaza in Pasong Tamo Makati City. 24th floor Training Room. West Contact Services. When I first met John Christopher Gonzales. He is sitting at the second row, right side of the room. I am sitting at the 4th row on the left side. We hardly talk and I barely notice his existence because we have different set of friends. I also had another love interest that time so we really didn’t had a chance to get to know each other.

Fast forward, that love interest I am talking about, became a failure. I started to overthink a lot of things, I became depressed and it had a big impact on my health. Half of my face? Not functioning. The nerves supporting the half my eyes, nose, lips, tongue – it stopped working. I had this condition when I was in college and it came back because of the problems I already stated above. The medical term is Bell’s Palsy and it is no joke.

After the training, almost all of us became closer and that is where I get the chance the talk with Jaycee. I remember him as the guy who was concern about me and my health condition. I appreciate his concern towards me and I think that is where it started. After a month or so of medication and therapy, I was healed. My facial expression became normal again.

We had the same shift together with others. We eat lunch everyday. We talk about life and sometimes non sense things. I listened to his corny jokes. He didn’t fail in making me smile/laugh every single time. I like his sense of humor. That’s one of my weaknesses. Ugh.

I just realized that after several months, we started spending most of our time together, just the two of us, as friends. After shift, we usually go to the malls [Glorietta | SM Makati | SM Bacoor] to watch movies or to eat. We go to the bookstore, to datablitz to buy games for his PS3 and sometimes, just to kill the time we go window shopping. We also go home together [he in  Bacoor and me, in Cavite City, that time Cavitex is still non existent] and had many funny moments at the bus.

Other’s think that we are “dating”. We didn’t want to put any label to it. All I know that time is we are happy together. We have a lot of things in common. We have the same level of craziness. We think alike.

But of course, it is not all fun isn’t it? We also argue about a lot of things. We are both competitive and have different opinions in certain topics and that spiced up our friendship. I also remembered arguing with him about petty things and the end result will be not talking to each other for several days. We were so immature back then. Funny thing to remember.

After spending time together [all the time], just when the feelings started to bloom, destiny started playing with us. We got separated. He had to leave the company to find another job. I felt sad. I felt alone. There’s nothing I could do but accept reality. I kept a journal that time and I still have it with me now. It was noted in there how much I miss him everyday.

We still see each other for a couple of months after his separation from the company. Until it stopped. Maybe we both became busy. Until the only means of our communication is just Facebook chat. And again, it stopped. Completely.

Fast forward, I had a boyfriend, she had a girlfriend, and we didn’t talk after that.

We are probably not meant for each other.

END_OF_DOCUMENT_TOKEN_TO_BE_REPLACED

When I am planning my itinerary in Davao, Britania is not on my list. I thought going to Surigao with plan of Tinuy-an and Enchanted river will be enough so I did not search for other where-to-go, not until my co-blogger, Sir JP of JPtravelouge informed me about Britania Islands.

After a couple of research about the Islands, I told myself, “I should include this in my itinerary no matter what!”

Romnick, my guide, fetch me at around 5:30 AM and we proceeded with the island hopping activity. We have to start early because I have to catch my flight later at 11PM.

Our first stop is the Naked Island

END_OF_DOCUMENT_TOKEN_TO_BE_REPLACED

At 1:30 AM, I left Gohotel and rode a taxi going to Ecoland Terminal. Luckily, there are vans bound to Mangagoy. Vans are faster than Buses. I paid 300 pesos and I am asleep the whole 3-4 hours of the trip. We arrived at Mangagoy around 5:30 AM.

END_OF_DOCUMENT_TOKEN_TO_BE_REPLACED

The second part of Kadayawan Festival is the Grand Float Parade. More than 20 beautiful floats made of flowers and fruits from different contestants are to be seen here. The champion will take 150,000 for the champion, 100,000 for the 1st runner up and 75,000 for the 2nd runner up. 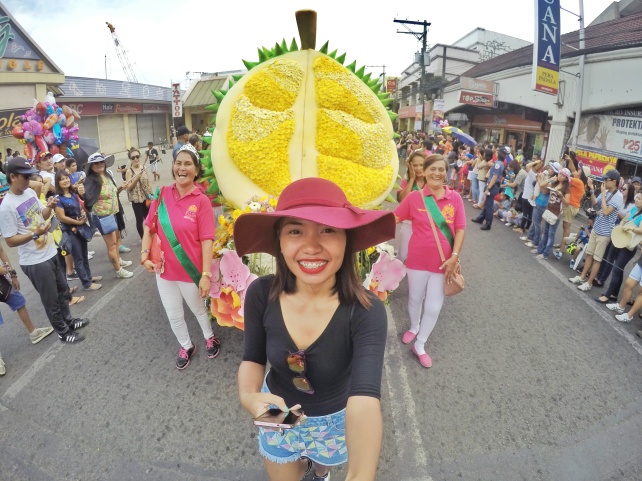 People are gathered again to experience the last event of Kadayawan. Everyone is happy and excited! I’ve noticed that the police officers are strict with their policy to not come near the floats especially if it’s on the move but what I liked most about them is they are not “very” strict because they let people take selfies if the floats are on halt. =)

END_OF_DOCUMENT_TOKEN_TO_BE_REPLACED

I woke up at 6:30 AM. I thought I am already late for Kadayawan Festival but it is just getting started. I rode a taxi and told the driver to drop me off at CM Recto Street. A lot of people are waiting for the parade. There are vendors everywhere, people are getting ready to capture the best moments of the festival.

The first part of the festival is the “Indak indak sa Kadawayan” and it showcases street dancers from different schools/places. I suddenly remembered the Panagbenga Festival in Baguio which has the same thing (street dance and float parade) but here in Davao, people are lucky enough because we can have a selfie with the performers. 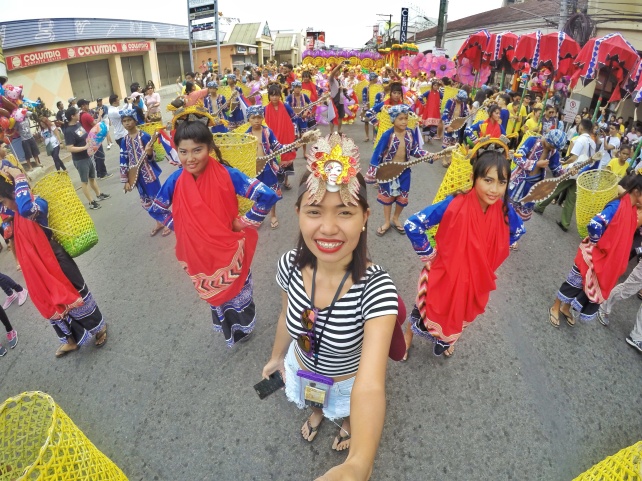 Kadayawan like other festivals in the Philippines are colorful and full of fun!

END_OF_DOCUMENT_TOKEN_TO_BE_REPLACED

If there’s a trip I am excited about for this year, it is my Davao Adventure. I also made sure to book a flight that will enable me to experience the colorful and fun fulling Kadayawan Festival. Hitting two birds in one stone! =) I planned my itinerary [DIY] and as day goes nearer, I am getting more excited. I made sure to include all tourist spots to not miss anything!

Davao,located in Mindanao region is the safest place in the country. It is the hometown of our dear President Rody Duterte. One of the disciplined places in the Philippines. Davao City is a no smoking city. The people here are very helpful specially for solo travelers so don’t be shy to ask anything. 🙂

My first day in Davao begins in Mati, Davao Oriental.

My departure from Manila to Davao is 7AM.

I arrived at Davao International Airport at around 9:00 AM.

Selfie with the famous Durian 🙂

From the airport, I took a cab going to my home for 2 days. It is just a room with private toilet and bath, with aircon, cable tv, sink, refrigerator and utensils. I got the room for only 500 per night.

The landmark is in Mandaue Foam, Lanang. For more details about the room, please contact Ms Mary Jane Dionela, she is very responsive and helped me a lot in how to get around in Davao City. Her number is: 09336501303. You can also add her in Facebook: (https://www.facebook.com/maryjanerosetedionela)

Check in time is 2PM but since I am too early, I just left my bag to their apartment and leave for Mati.